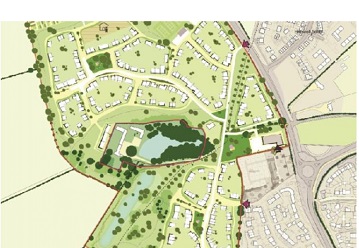 Up to 320 homes and an accompanying community centre will be built on a former Banbury farm as long as the developer pays more than £5m for local services.

Cllr Colin Clarke, the council’s lead member for planning, said: “This site has long been earmarked in our adopted Local Plan to help provide the homes that Banbury needs

“This is a balanced proposal which will include significant green spaces and community facilities to support residents.

“It’s vital that as new homes are approved, we plan for the infrastructure needed to support them. That is why conditions have been set to fund a new school, healthcare, public transport and sports and play areas.”

The permission is subject to Trinity College, Oxford, entering into a legal agreement to provide contributions for education, leisure and healthcare provisions.

Amenities are expected to include a community hall, shopping centre, playing fields and allotments.

While 30 per cent of the houses must be affordable and the developer must pay £3,552,751 towards schooling, £276,480 to support primary care infrastructure and £267,182 for off-site sports facilities.

The Local Plan allocates 250 homes for the site, but the committee agreed with the assessment that the overall number could be accommodated by building more of the small and medium-sized homes that are most needed locally.

The estates bursar from Trinity College told the committee: “We’ve worked hard to create what we believe is a great scheme.

“If consent is granted, we will continue to work hard to ensure the great living environment which we aspire to create is actually delivered.”

Drayton Parish Council and Cllr George Reynolds raised concerns about the development adding to the encroachment from Banbury on the village, asking for more trees to screen the homes and bungalows.

But Cllr Cassi Perry congratulated Trinity College for having a permanent buffer zone between the site and Drayton.

Several councillors questioned how the open space will be managed as it seems the development is under Drayton parish, rather than Banbury, so it should be changed so the town council can maintain it.

Another application with more detailed plans on exactly how many homes there will be, what they will look like and what else will be on the site will need to be approved before building works can start.

Drayton Lodge Farm used to have a caravan park, nine-hole golf course and a fishing lake before closing in 2014 with the land to be used for housing.