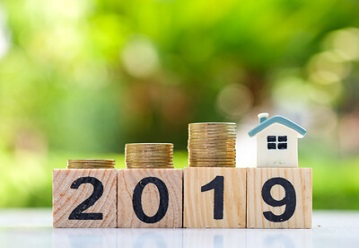 Despite a marginal drop in prospective buyers in June, and a house price plummet in London, the housing market shows signs of resilience.

House prices have dropped in London for the eighth quarter in a row according to Nationwide Building Society, pushing the average value of a home down 2.6 per cent

Figures for the three months to June showed London and the South East were the worst performers in a national housing market that has managed to keep growing through the past three years of Brexit turmoil, but only at a modest pace.

The annual national growth rate in prices slipped to 0.5 per cent in June from 0.6 per cent in May and 0.9 per cent in April, pushing the average cost of a UK home to £216,515. Most analysts said they expect only modest increases during the rest of 2019.

The slide in London prices has been mostly felt by the owners of expensive properties in the capital, with multimillion-pound homes experiencing the worst falls.

NAEA Propertymark’s June Housing Report shows that, despite Brexit uncertainty, the number of prospective buyers in the UK remains high for the year. There were 305 house hunters registered per branch in June, just a 1 per cent year-on-year difference compared to June 2018.

The number of sales agreed remained high for the second month running, matching last year’s average of nine per branch.